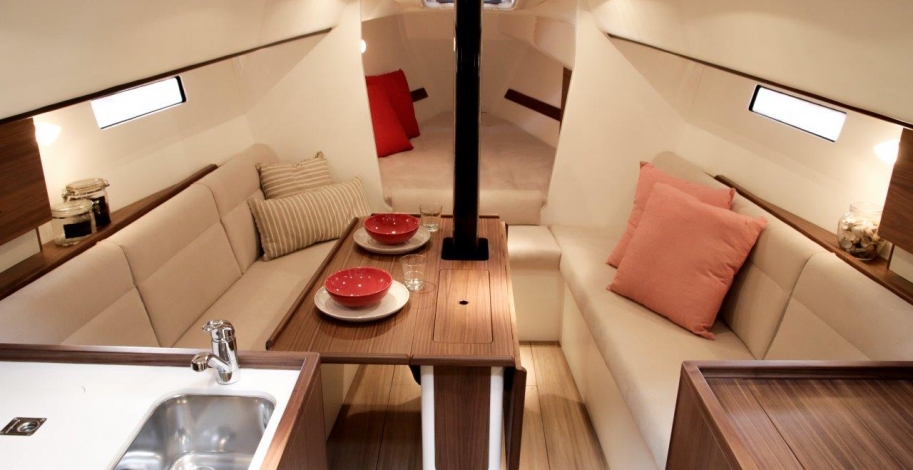 The J/97E is a pure sailing boat. Fast, easy to sail, and comfortable. With a family crew, J/97E can cruise anywhere with unparalleled ease in sumptuous accommodations. That is a given. What is not is the fact that underneath that exotic, sinfully luxurious interior you see above is a pure thoroughbred-- the unbridled, raw power of a Ferrari 12-cylinder engine rumbling to a roar to blast you around the track while you relax in Rolls-Royce Ultra-Leather comfort and relish Jaguar-like silkeness in the S-turns-- a rare combination, indeed.

Below is a report from Paul Heys that explains how this exotic animal can breath life into your casual evening beer can races or weekend jaunts offshore. As Paul explains,

"The annual JPMorgan Asset Management Round the Island Race, organized by the Island Sailing Club, is one of the most popular fixtures on the Solent racing calendar. Competitors come from Europe and the USA, as well as all over the UK, to race the 50 mile course round the Isle of Wight. This year the event attracted 1779 entrants (and no that's not a typo!) with J/80, J/105 & J/109 classes and many larger J's. The team from J/UK brought out the new J/97 'Jenga' for her debut regatta in the 55 boat IRC Division 3A. By race end, the J/97 had finished second on elapsed and corrected time in class and was the top J/Boat overall on IRC corrected time.

We had a crew of sevent: MC (Heys) on the tiller, myself, Emma on mainsheet, Kirsty the owner of the J109 J Dream on pit, (Kirsty's husband Dave was sailing J Dream with charter guests). Toby from the J Dream crew on jib, Lance one of our big boat owners on mast and Pietro on bow. Our sail wardrobe included 3 sails: Elvstrom, main, Code 2 jib on hanks with battens, and Code 2 spinnaker.

The forecast was 6-8 knots rising to 12-14 by the time we reached the halfway mark at St Catherines point on the South side of the island. We were in a class of 55 boats in a larger group of perhaps 300 boats all of whom started together. Whilst we were nearly the highest rated, there were quite a lot of longer older boats that could have blanketed us on the fetch if we did not manage to get clear air. From a tidal and shortest distance point of view the island (leeward) end is always favored, from a clear wind point of view with this wind direction, the pin was favored. We opted for the pin and with little difficulty we were able to nail the pin end start. We were initially fetching in 5-6 knots of wind and were pleased to slowly work away from the closest boat which was an MG 335 and all of the pack that had started well at our end. The leg from the start line to the Needles is about 11 miles and the tide was now building to 2 knots in the deep channel, as the tide built the wind backed and we became close hauled. We were comfortable with our speed and within 10 minutes of starting we were in the back of the previous class that had started 10 minutes earlier. On the way down to the Needles we did not see any of our fleet and were working our way through the earlier starters.

Tactically we found the Solent difficult, as the breeze was localized, so twice we swapped sides which we normally don't like to do, however the extra pressure appeared to be worth the chase. We discovered that we had not made a perfect job of this, as when we arrived at the Needles, we found ourselves in the company of a Sigma 33 and a Hunter Impala, two slower boats that had started at the same time.

Rounding the Needles we hoisted the code 2 and immediately goosewinged to punch straight into the tide, which would now be against us for the full 25 miles of the run. The wind tends to follow the coast when in this direction so there was at no point, any bow up spinnaker reaching, instead we ran deep the whole way, we used a mixture of goose winging and normal 165 true sailing trying not to gybe out into the stronger foul tide and utilizing the inshore back eddies. The breeze was between 10 and 18 knots. We passed many boats on the run and only a couple passed us. The Leeward mark at Bembridge was a massive park up of over 500 boats as two opposing winds cancelled each other out. We could see 122's and 133's in front of us and saw lots of boats we had passed piling in behind us, so it became a major restart.

Exiting the ruck, we had no idea how we were placed as it was clear that massive losses and gains would have taken place. The old breeze prevailed and we started beating against the tide which had again changed against us, in 2-3 knots of wind. We held on to our position and slowly the breeze built and once it got over 6 knots we stepped away from a J 92 and caught and passed a few larger boats. The beat to the finish saw us in company with Prima 38, X 362, J 109's, J 105's but no smaller boats. Our speed and height was good and only the Prima and the X made small gains. We passed and moved away from the other boats.

As we approached the finish a boat that we had not previously seen, got a gun a few minutes before we got our gun, this was the Elan 333 that won our class. We think that they passed us at Bembridge, although they could have led us out of the Solent.

Upon arriving ashore we found that we had beaten all other J's on handicap. It was a small boat race with some parking lots, but the boat's performance when in contact with others was great!

To summarize: • A code 1 jib and some softer rig settings will help optimize performance in under 6 knots and next time we will try moving crew weight a bit further forward. • In over 6 knots we are very happy with speed and height of the boat. • Running, very good in all conditions and we can get down to 180 with our Elvstrom kite. • Spinnaker reaching we have not raced in this mode yet, but on demo sails the boat seems very manageable. • Max downwind speed we recorded in the race was 10 knots.

We are excited by the speed of the J/97 and her potential for racing IRC. In all, she is a versatile & comfortable boat and everyone on board enjoyed sailing her in this debut race!"